Quantum jiu-jitsu is a Gracie / Brazilian jiu-jitsu studio located at 1201 Mountain Road, Moncton. This blog post discusses Quantum Jiu-jitsu and its owner, Alex MacKinnon, as informed by 3+’s interview with the owner.

Alex MacKinnon has been interested in martial arts for a long time, doing Chito Ryu Karate for a few years as a young boy. However, his interest in jiu-jitsu in particular peaked when he returned from Japan-where he moved for two years (‘05-‘07) following receiving his degree in mathematics from Mount Allison University. Upon moving to Moncton in 2007 after returning from Japan, Alex began doing research on effective martial arts, and as a result began doing a lot of research on Brazilian jiu-jitsu. Brazilian jiu-jitsu is a martial art and combat sport based on ground fighting and submission holds. It focuses on the skill of taking an opponent to the ground, controlling one’s opponent, gaining a dominant position and using a number of techniques to force them into submission via joint locks or chokeholds. Following his internet-fuelled interest of Brazilian Jiu Jitsu, in 2007 Alex began seriously training Brazilian jiu-jitsu in Moncton. He has been doing Brazilian Jiu-Jitsu ever since, and received his black belt from Prof. Rice, who himself received his black belt from Rickson Gracie – a member of the Gracie family, who are largely responsible for popularizing jiu-jitsu in North America. What Alex says he likes about jiu-jitsu is that it is heavily focused on not necessarily injuring one’s opponents, but rather on control, and submitting an opponent if necessary. In December 2020, Alex did something he never thought he would: open his very own jiu-jitsu studio, Quantum Jiu-Jitsu. 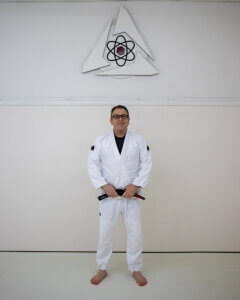 Alex likes the local business community in greater Moncton because of how supportive it is. “Businesses will share your posts and work together with your business to help growth” he explained, “people are eager to support local businesses in the Moncton area”. Compared to the other larger cities he has lived in, Alex says that local business support is in abundance in Moncton.

Advice that Alex has for people looking to start a business in the Greater Moncton area is to get help and have friends to support you from day one and support your vision. Alex says he would not be where he is if he did not have the support of his friends and coaches. Despite not thinking he would ever own a local business, Quantum, with the support of his friends, has been growing rapidly and they have hit over 100 members-an expansion of the studio is planned for before the year’s end. The studio’s vision of jiu-jitsu for everyone has been significantly supported by Alex’s coaches and friends to help achieve this success.

Alex says that “Quantum is a jiu-jitsu school with its primary focus on self defense, but one that (at the same time) also caters to all audiences”. Alex says that if someone at the studio wants to compete, they can and the studio will completely support and endorse this person, but he also wants Quantum to be a jiu-jitsu school for people not interested in competing. For Alex there is a lot of value in Jiu-Jitsu for not only those wishing to compete and become world champions, but also for people with average everyday professions who have no intentions of competing–in particular for jobs such as police officers where the martial art can be needed in critical situations (jiu-jitsu for everyone is Quantum’s unofficial mission statement). He thinks that this value is the attainment of important skills that can be transferred to all other areas of life- the skill of being confident being the most important. It is this goal of “jiu-jitsu for everyone” that motivates Quantum’s focus on making their training as injury free as possible.

Alex believes it is important for anyone starting a jiu-jitsu gym/studio to have enough jiu-jitsu credentials to ensure that clients have confidence in the effectiveness of the school’s teachings. Although Alex did not have to worry about having the necessary credentials, upon starting his business he did have to deal with non-jiu-jitsu related challenges, such as fears of failure, accounting, and regulation. Nevertheless, since jiu-jitsu is his passion, Alex is very happy he started his studio. He says that the most rewarding part of running his business is witnessing student growth, in terms of technical ability. He says that “seeing young adolescents being able to take down and submit grown adults reaffirms that what he is teaching works”.