We sat down with Mark Kim, part owner of the family-owned Korean restaurant Mansu BBQ, which is in Dieppe at 279 Amirault street.

Before moving to Canada in 2006, Mark’s family was involved in the food industry in Korea. “They never had intentions of starting a restaurant in Canada,” says Mark Kim. Instead, they had a stand at the Dieppe market where they sold their food every Saturday. As popularity grew, they received demands from the community for a storefront restaurant. 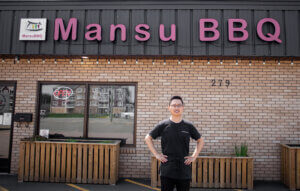 As such, despite fears of failure and of the headaches caused by regulatory challenges, Mark’s family capitulated to the communities’ demands and opened Mansu BBQ’s restaurant in 2017. Mark said the need for a restaurant store front was something they felt was coming, so they took that leap. It is at this point that Mark and his family adopted the Mansu BBQ restaurant as their full-time jobs. Dieppe market patrons, however, can still enjoy Mansu BBQ on Saturdays.

Mansu’s menu consists of a wide variety of sushi and Korean dishes, each requiring their respective chef. This menu reflects Mansu’s desire to stand out in the Greater Moncton restaurant industry and to simultaneously provide their customers with great tasting food. In fact, because of us ordering a spicy pork after the interview with Mark, we can attest to their success in realizing these goals.

Although operating a small business can necessitate a lot of work and risks taking, Mark says that it has been worth it. Mark says that the most rewarding part of running Mansu BBQ has been witnessing customers of Mansu BBQ eagerly bringing their friends in to expose them to their menu and the positive reviews people leave online.

Mark is also optimistic about the Greater Moncton Business community, citing the region’s current significant growth. Relatedly, one main piece of advice that Mark had for people wanting to start a business in Greater Moncton was to be unique. Finding a food, product or a service that differentiates you from the other businesses around will help you be successful as the region grows and competition grows with it. As Mark put it, “If you want to start a business, make sure you have a firm item or service that no one else offers to distance yourself from the competitors”. Mansu follows that same advice with their unique variety of dishes.