How is Southeast New Brunswick doing? Highlights from the 2021 Population Census, Part 1.

How is Southeast New Brunswick doing?

Highlights from the 2021 Population Census, Part 1.

The Census is the most important demographic survey of a country. It allows to know with a high level of statistical accuracy, the size of the population, its age structure, its composition, and its distribution. These are very important indicators to understand the current situation of the people who make your economy grow, and to guide policymaking for increasing your population’s wellbeing. They are also key to forecast what is going to happen with your population in the future and to plan ahead to avoid potential crisis, for example, the reduction of the Labour Force due to age retirement, or to make the most of possible growing opportunities, such as an increase in immigration.

From a business perspective, Goldy Hyder, President and CEO of the Business Council of Canada, affirms that the 2021 Census information is indispensable because “The census allows businesses to use reliable data on the population to make decisions about their operations, about their workforce, about their infrastructure, about their expansions. Businesses are in the business of knowing their customer, and the census makes that possible”.

In Canada, the census happens every 5 years, and as of today, Statistics Canada has released data on population and dwelling counts; age, sex at birth and gender; type of dwellings; families, households, and marital status; Canadian military experience; income and language; Indigenous Peoples and housing based on the 2021 census.

So, how is Southeast New Brunswick and the Greater Moncton Region doing? 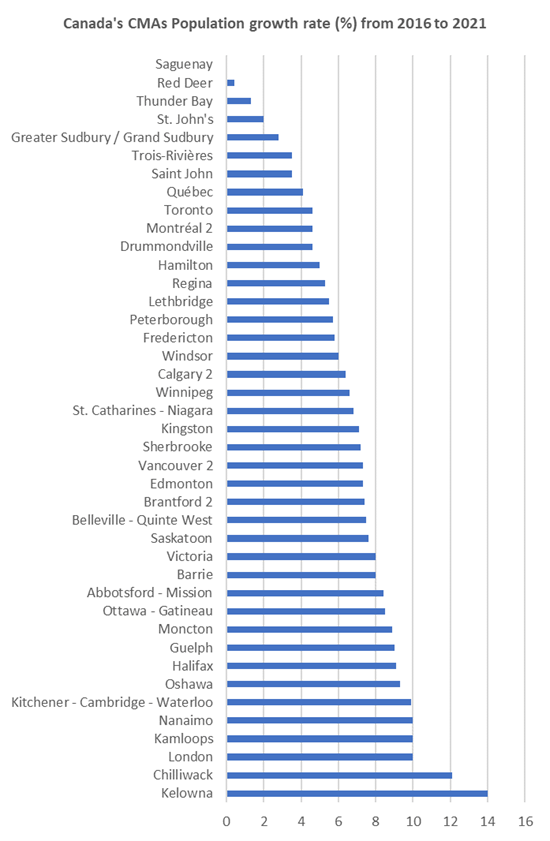 Also, it is important to keep track of the changes in the age structure of our region’s population, given that demographic trends are fundamental to forecast how our population will change with time, for example: how many children are being born versus how many people are reaching their retirement age. The pattern of consumption of goods and services, as well as the needs of families with young children are very different from those of retired couples. Hence, these changes in population trends are important to analyze. 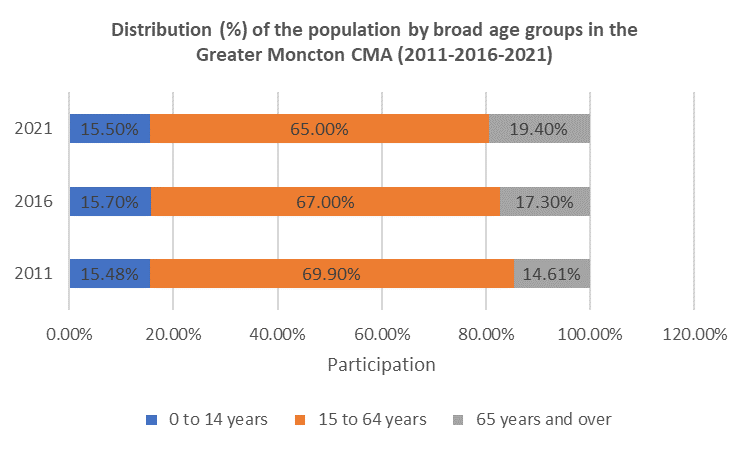 From the figure, the population 65 and older is the fastest growing group in the Moncton CMA, children from 0 to 14 years have a stable participation, while the population 15 to 64 years of age is decreasing its participation. The same is happening in Canada as a whole. This explains in part why the participation rate in the labour force has been declining and why we are also seeing very low unemployment rates.

This level of population growth is a good sign, especially since a big component of the province’s Gross Domestic Product (GDP) comes from household spending[1] and given the tightness in the job market that we are experiencing right now. Nevertheless, we need to keep this level of growth in the following years, as more and more people aged 65 or more leave the job market, and natural population growth continues to decline. In other words, this means that we need more immigration, more international and local students who want to remain in the region after graduation, as well as more workers from other parts of Canada who want to relocate here. With all our partners in the region, the municipalities, the Greater Moncton Local Immigration Partnership, and our private sector, we are working towards that objective, to become the hub for international and interprovincial immigration in Atlantic Canada.