CAVOK Brewery is a brewery with a location in Dieppe at 250 Dieppe Blvd, and another location at Aboiteau Beach in Cap‑Péle. This blog post explores the history of the business, and as well the experience of one of the business’ owners, Serge Nadeau.

Serge tells us that, although his father owned many businesses while he was growing up, when he was young he had no desire to own a business. However, when he started university he became intrigued with trying different types of beers. He recounted that he and his friends began pursuing this interest by going to the liquor store and testing different beers from large breweries. Similarly, since 1996 Serge has been visiting microbreweries wherever he goes around the world. He kept this interest in beer when he moved to Montreal to work as an air traffic controller. While in Montreal, he met another air traffic controller from New Brunswick who was also passionate about beer: Serge Basque. Together they decided in around 2005 that if they were to return to New Brunswick, they would start their very own brewery. In the meanwhile, they prepared by starting to test recipes at home. After the two Serges moved to Greater Moncton and completed the relevant paperwork, they started a brewery in Serge Nadeau’s garage. While operating at this location, they merely sold their product to pubs and restaurants in New Brunswick. However, after operating out of that location for two years, the two owners started the process of opening a proper brewery with seating inside (the taproom). As such, CAVOK Brewery has been at 250 Dieppe Blvd for two years now. The term ‘CAVOK’ is an aviation acronym meaning Ceiling And Visibility are OK.

CAVOK’s taproom can accommodate more than 100 people, and has a selection of more than 20 products on tap, most created and produced by Cavok as well as others products created by craft breweries from all corners of the province. Other local products such as spirits, wine, pretzels, and cheeses can also be enjoyed here, as well as To-go beer cans,  growler fills,  and Cavok swag, which includes t-shirts, hoodies, hats, and more! Also, the brewery is visible from the taproom. An important final point is that the taproom is family and children friendly. 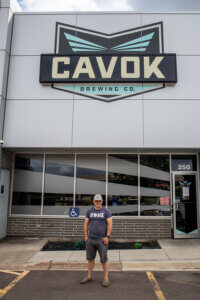 Serge explained that one of the most difficult parts of starting CAVOK was getting the required paperwork done. As Serge told us, to become an official brewery, there are a number of agencies that one has to deal with regarding licensing, such as: public safety, public health, ANBL, and the federal government. A significant difficulty associated with the opening of CAVOK’s Dieppe location, was receiving the necessary funding. “The brewing equipment that we needed for the Dieppe location ws expensive”, Nadeau said, “ and it is difficult to get the relevant funding when all you have to show in exchange for funding is a plan on paper.

Nevertheless, Serge Nadeau stated to us that he is very happy that they started CAVOK, and explained that the most rewarding part of running their business is seeing the taphouse when it is packed, seeing people praising their beer on social media, seeing strangers at parties drinking their beer, and receiving support from the community. In addition to managing the brewery of their dreams, both Serges still work as air traffic controllers in Moncton.

As a local business, CAVOK is very supportive of the local business community in Greater Moncton. When building their brewery, they chose to hire local contractors and workers despite getting cheaper quotes from outside the province. It didn’t make sense for them to not support locals when Greater Moncton had everything they needed. They have seen their support in the community pay off by having many people they hired to work on the construction come in and enjoy one of their beers. They also carry local products like maple syrup and dog treats. They wanted to show support to other smaller businesses in the community by giving them a chance to sell their products.  At Cavok they do everything in house from the brewing process to caning and shipping out. They are a local business that strives to support and help the local business community flourish. They like the Greater Moncton business community because of how close knit it is. Greater Moncton is a somewhat big region, but still allows you to meet people and know a good amount of the population. CAVOK is also located a 20 minute drive from anywhere in Greater Moncton, which is something they love as it allows people easy access to come experience CAVOK.

One piece of advice that Serge would give to anyone looking to start a business, is to plan it out and be organized. Making a proper business plan and lists of how you will do stuff and run things is important. Knowing what things you should prioritize is also something Serge said was important. As such, Serge said that someone considering starting a business should definitely go for their dreams, but do so in a rational and well planned way.