Kevin grew up in Woodstock, NB, where he pumped gas at his dad’s service station, which also sold some used cars. It was while working at this service station and helping his dad drive used cars from Montreal that Kevin found, as he put it, his God-given passion for cars and began considering selling cars on his own. As such, at sixteen Kevin began selling cars, and has confessed that by the age of 18, he owned around 30 cars. With his passion for cars still burning, he received his dealer license and started Campbell’s Auto as a part-time venture in 1986. In 1990, Kevin made Campbell’s Auto his full-time job. 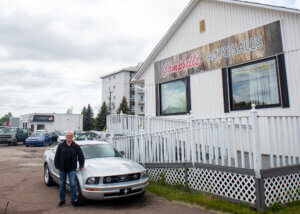 However, as Kevin told us, starting his business was by no means easy. Kevin told us that when he first started his business, he did not have enough money to buy and sell cars, and as such had to borrow money from family members and then give half his profits to these family members. Additionally, at the start Kevin was putting in around 60 hours of work.

Nevertheless, Kevin says that the journey has been worth it. As he put it, “I do not consider this work, this is my passion, and I am excited to wake up everyday and employ people and try to solve people’s (car) problems”. Kevin says that the most rewarding part of operating his business is interacting and helping people. This no doubt stems from Kevin’s love of people.

Throughout the talk with Kevin, he mentioned a few pieces of advice for people wanting to start a business. The main piece of advice he mentioned, is to “start ugly”. In other words, do not wait to have everything figured out. Instead of waiting for the perfect amount of money, for the perfect product, for the perfect time, or the perfect location, just jump in and get started. “If I had waited for everything to be perfect, I would still be waiting, because circumstances for starting a business will never be perfect,” he said. As further advice, he said that your goal in starting your business cannot be money, otherwise you will make bad decisions by adopting a perspective of business in which others must lose for you to win. Rather, money is the by-product of good service. A final piece of advice he gave was to live on less money than one makes and use the saved money to make more money. This is especially important in the initial stages of running a business.