In this blog post, Bajo Food Products and the owner’s experiences are discussed as informed by an interview we conducted with the owner, Blondy Balewula.

Through an immigration program called Express Entry, which is a program for skilled immigrants who want to settle in Canada permanently and take part in the economy, Blondy Balewula and his family moved to Canada and became permanent residents in 2018. Before this, Blondy and his family lived in Cape Town, South Africa. Blondy is a businessman by instinct, owning several businesses over the years, including an import and export company currently operating in South Africa that he has been operating for ten years now. He explained that a 9-5 job is not a lifestyle that works for him, and that he has always wanted to make something for himself and to have something for his kids. As he puts it, “it is this business instinct that led me, immediately after arriving in Canada in 2018, to the idea of starting a business.” Bajo Food Products officially became a business in February, 2021. 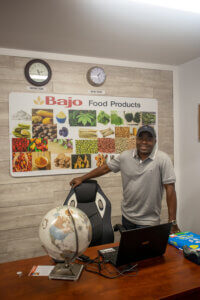 However, the process of starting the business was not necessarily easy. As Blondy explains, finding the initial money required to start a business is usually difficult enough, however it is even more difficult for immigrants who have no credit for banks to assess. In fact, he stated that finding the initial money to start the business was the greatest challenge of starting his business. He overcame this challenge by receiving an Impact loan from 3+, which is a low-interest loan that helps foster small and medium-sized businesses in Greater Moncton. Furthermore, although Blondy had been a businessman for several years, every region has its own unique way of doing things, and as such Blondy was completely unfamiliar with the Greater Moncton region’s business culture and business logistics. To address this, he took part in the 3+’s Business Immigrant Essentials course, which is a free two-week business course tailored to newcomers and covers the fundamentals for starting a business in Greater Moncton. He cannot stress enough how much the course helped him. As he said, “It equipped me in every sense of the word to start a business in the Greater Moncton Region”.

A piece of advice he gave for anyone interested in starting a business is to have perseverance, ambition, and the willingness to go for what one wants.